A Brief Guide to Install LED Lighting Strips on Motorcycle

With the fast development of LED industry in the past few years, the sale prices of LED lights are significantly reduced, and they are now widely used in kinds of areas, especially in automotive and motorcycles’ lighting applications. As the LEDs has less power consumption and a longer service lifespan compared with other traditional lighting sources, they has became the favorite choices for many drivers, who like to use them to decorate their loved autos or motorcycles. With basic electrical knowledge, you can easily install LED lights. Now, as a super LED lighting DIYer, I will give a brief guide to install LED lighting strips on motorcycle.

Here is there step-by-step guide:

Step 1:
Disconnect the battery on your motorcycle, it is usually placed under the seat, you can easily locate it.

Step 2
Prepare the LED strips. You can first place on the ground.

Step 3
Test the LED lighting strips to make sure all of them can work well. To do that, you just need to connect the positive lead wire of LED strip to the positive terminal of the motorcycle’s battery, and the negative lead wire of LED strip to the negative terminal of battery, and then to see whether it can light on. Sometimes, you might find that some LED strips don’t light on in this connecting way, try reversed connection, as some manufacture might happened to make reversed wires.

Step 4
Install the LED light strips on your motorcycle. You can mount the strips wherever you like. If you are not sure whether it can reach to your expected effect, a great method is that you first hood up the LED strips to the battery and then to preview actual effect. After you satisfied positions, just secure the LED strip with dual-sided VHB taps.

Step 5
Route the lead wires along the frame of the motorcycle until they are close to the battery.

Step 6
In the relay box, you will find 5 wires, 2 black, 1 white, 1 red, and 1 blue. Connect the red wire to the fuse boat which will be filled with 5 amp fuses in following step. Select either one black lead wire to connect to the negative terminal of the battery. The blue one is the antenna wire, and you just strap it along the main motorcycle’s frame. The remaining black and white wire is used to plug into one of the quick connectors of each wire junction box respectively. You can see the diagram below. 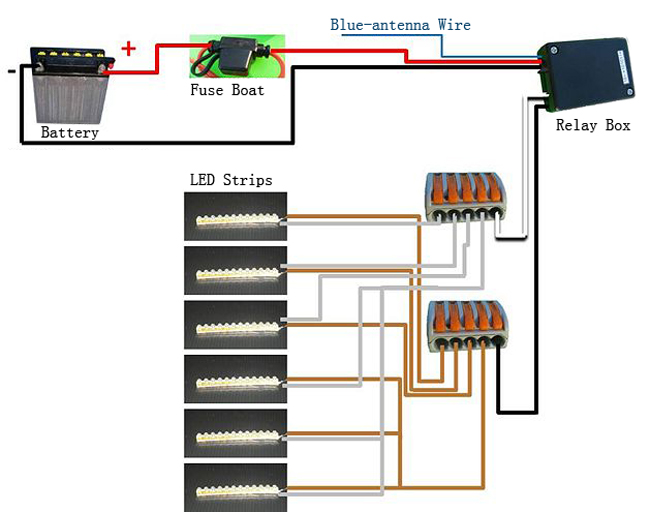 Step 7
After checking all the wires are connected correctly, install the 5 amp fuse into the fuse boat, and turn on the battery, and enjoy the wonderful LED lighting.